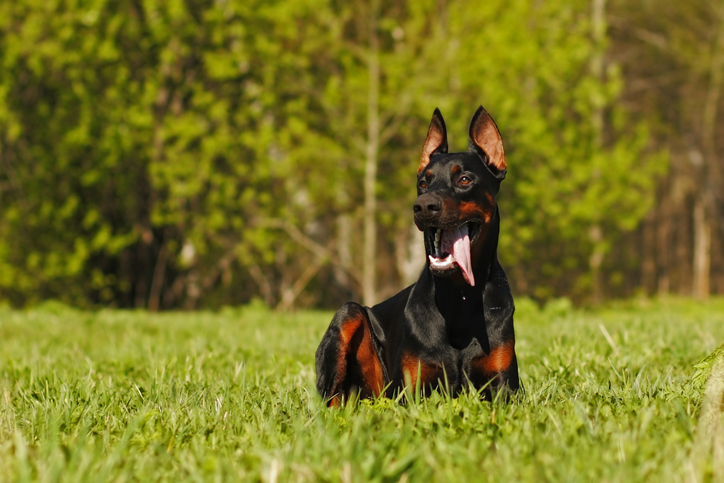 Doberman Pinschers are watchful, energetic, and obedient. Check out all you need to know about one of the best working dog breeds on the planet.

First bred in 1890 in Thuringia, a German state, the origin of the Doberman is extremely unique. Karl Friedrich Louis Dobermann, the local tax collector of the town of Apolda, wanted a breed that would be perfect for protecting him while making collections. Herr Dobermann happened to run the Apolda dog pound, giving him access to many breeds – and that’s how the Doberman Pinscher came into being!

But after World War II, the breed was nearly lost. Werner Jung is credited with single-handedly and heroically saving the Doberman Pinscher breed, searching farms for Pinschers and risking his life to smuggle a black and red female Doberman Pinscher into West Germany. And we’re thankful he did!

Sadly, the Doberman Pinscher is often stereotyped as being aggressive and combative because of its origin. But really, Dobes have an even temperament and easy trainability. They’re affectionate, sociable and can easily be socialized with other dogs.

Why We Love the Doberman Pinschers Breed

The Doberman Pinscher is one of the most overbred, misunderstood, and stigmatized breeds in the country, which makes them likely to be abandoned by their owners. Too many of these pups end up in shelters because of poor breeding practices and overbreeding, which can cause health and temperament issues. Put an end to these practices and check out a Doberman Pinscher rescue instead!

Whether you’re looking for a Doberman Pinscher puppy or a full-grown pooch, there are tons of rescues waiting to find a home! Here are just a few:

Find more Doberman Pinschers to be rescued in your area