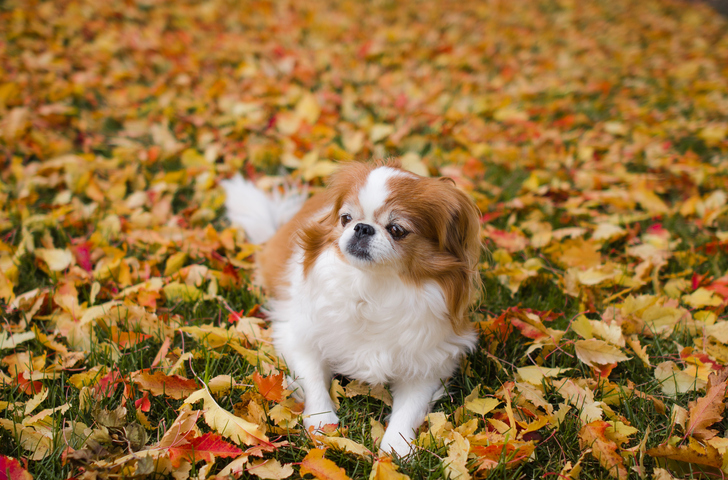 It’s no surprise these regal pups were the choice of Japanese royalty. When you meet one of these gentle and loving dogs, you’ll see why they’re so hard to resist!

This dog’s name is perhaps more inaccurate than any other breed out there. The Japanese Chin is neither Japanese, nor does it have much of a chin. Originally from China, these dogs eventually made their way to Japan, where they became the pampered pups of the royal palace. The Japanese typically believed dogs were reincarnations of evil humans, but not so with the Chin. With their loving and loyal dispositions and regal, silky coats, the Japanese Chin were considered a cut above the rest.

Today, the Japanese Chin remains a true companion breed. These dogs are dedicated to their families and love nothing more than cuddling in your lap. The Japanese Chin shows none of the hyper or yappy tendencies exhibited by many toy breeds, but that doesn’t mean he isn’t playful! Japanese Chins are famous for their signature dance move, the Chin Spin. These pups love to spin in circles, often on their hind legs! Dizzyingly adorable and always loyal, the Japanese Chin is sure to bring happiness to your family.

Why We Love the Japanese Chin Breed

With their silky coats and loving temperaments, the Chin is a popular breed. This means that Japanese Chin are often victim to overbreeding, which can cause health problems such as slipped knee-caps, heart murmurs and cataracts. Furthermore, many owners are simply not ready for the responsibility of owning a dog, meaning many end up abandoned or in shelters. If you’re ready to adopt a Japanese Chin puppy or adult, please consider opening your home to a rescue dog before turning to a breeder or puppy mill.

If this loving lapdog is the perfect match for you, there are plenty of Japanese Chin rescue dogs in need of a forever home. These are just a few:

Find more Japanese Chin to be rescued in your area