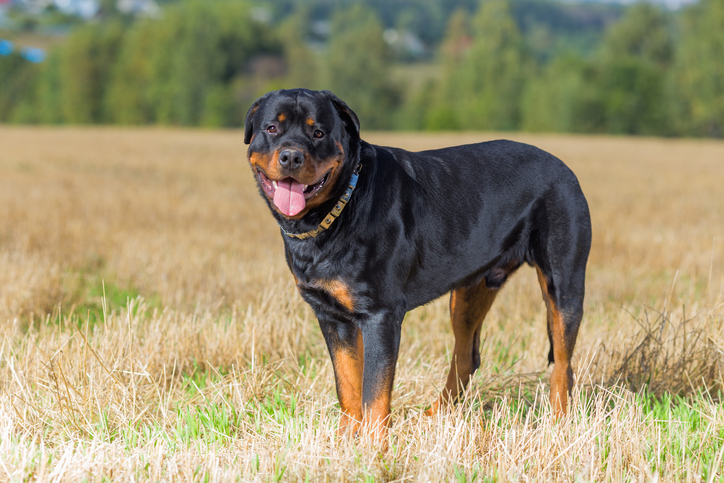 Rottweilers are loyal, industrious and fearless pups that take the meaning of “man’s best friend” to a new level. Find out if this powerful breed is right for you.

Despite what you may recollect from the portrayal of Rottweilers in films like The Omen (yikes!), Rottweilers are actually more known for their heroics and loyalty to humankind. They have a natural protective instinct that makes them great search and rescue dogs and also amazing guide dogs.

In 2009, a two-year-old Rottweiler rescue in the United Kingdom saved a woman from an assault and stood guard over her until police arrived. The pup, Jake, was nominated by the Coventry police for the bravery award and medallion after the incident. The attacker was caught and jailed, all because of a radical dog with a natural instinct to protect. How many dog owners do you know can say their dog is a crime-fighter?

Why We Love the Rottweiler Breed

Rottweilers are severely misunderstood, especially because of sensationalist news coverage. Poor breeding practices, which can lead to temperament issues, haven’t helped these lovable pups either. Overbreeding also exacerbates health issues in Rottweilers like hip dysplasia, cancer, and heart disease. Put an end to overbreeding and save the Rottweiler breed from a grim fate. If you’re thinking about adopting a Rottweiler, take a look at a Rottweiler rescue instead!

Whether you’re looking for a Rottweiler puppy or an adult Rottweiler dog, there are plenty of rescues that can’t wait to meet you! Here are just a few:

Find more Rottweilers to be rescued in your area