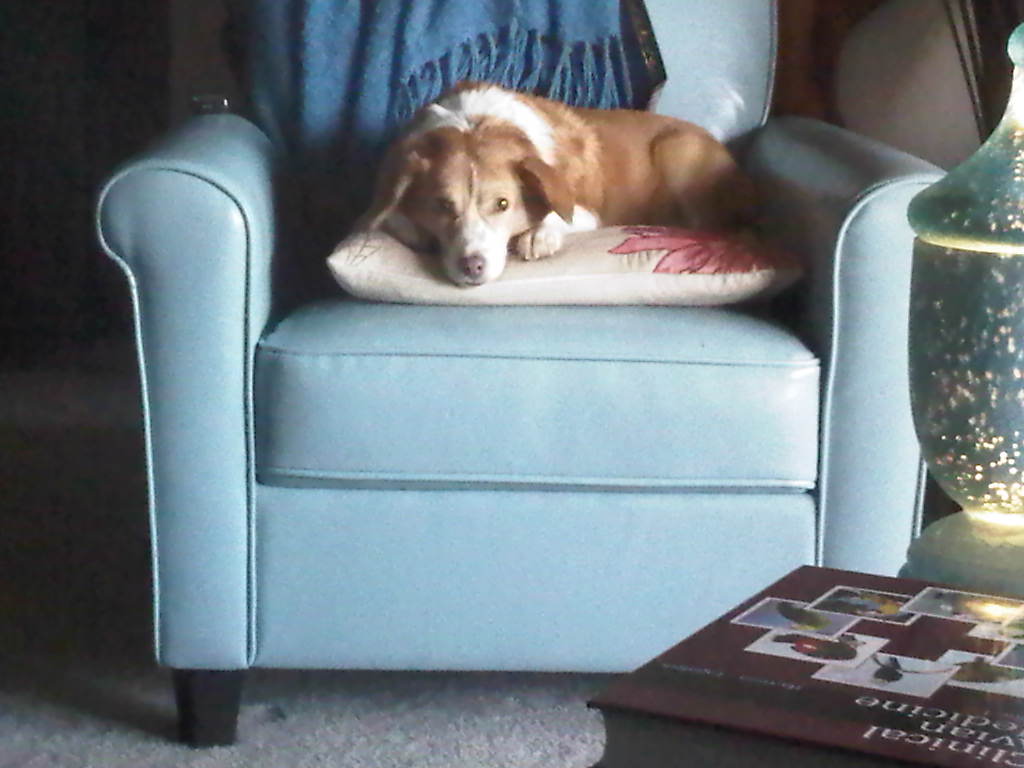 I went to Petco on a day that they happened to have an adoption event, not expecting a little dog to come live with us from that day forward. I went to look at the dogs and thought this little corgi mix was the cutest, strangest little dog I'd ever seen, named Cassie. Before I knew it, she was climbing up the collapsible pen and into my arms. I found the lady running the event and gave her Cassie back. I thought she was a doll, but the fact that she climbed up the pen worried me because I have a parrot in a big cage, and didn't want her climbing up the sides of the cage. I kept looking at all the dogs, as several would have been a good size for our apartment. I found another little mutt named Sandy and thought she would be a good fit, with a good temperament. I called my fiancé and told him to come to the store to meet Sandy, he said if I was this serious then to come back home, give him an hour to get ready, and we could go back together. We went back an hour later, and I asked the man in charge if Sandy was still there. She had been placed and went to her new home within that hour. The first lady I had spoken to said I should meet with Cassie, as she had the same kind of temperament as Sandy. Then Cass climbed up the pen, again, into my arms. We walked Cass around the store, filled out the paperwork, bought some toys, a bed, and dishes, and a few hours later after the event, they brought Cass to our apartment for a home visit. They explained that Cassie was rescued from a high kill shelter in the south, with her 9 puppies. 8 of them survived the trip north. The pups were all placed out once they got back here. After having her for a while, we discovered she had a pellet in her hind leg, a broken tooth, and a bladder that would require surgery a couple months after we got her. Plus she had scars on her neck from where a collar would have been embedded. She was only 2. Cass sniffed around for a few minutes, then jumped up on the couch and fell asleep. She's been here ever since. And she hasn't once tried climbing up the side of our bird's cage. I'm convinced Cass had me pegged as soon as she saw me, as whenever I'm home, she's my shadow. I couldn't imagine things turning out any other way. Even with her health issues, she has been the most resilient, friendly dog who loves everyone she meets. I couldn't imagine not adopting another dog after having her.