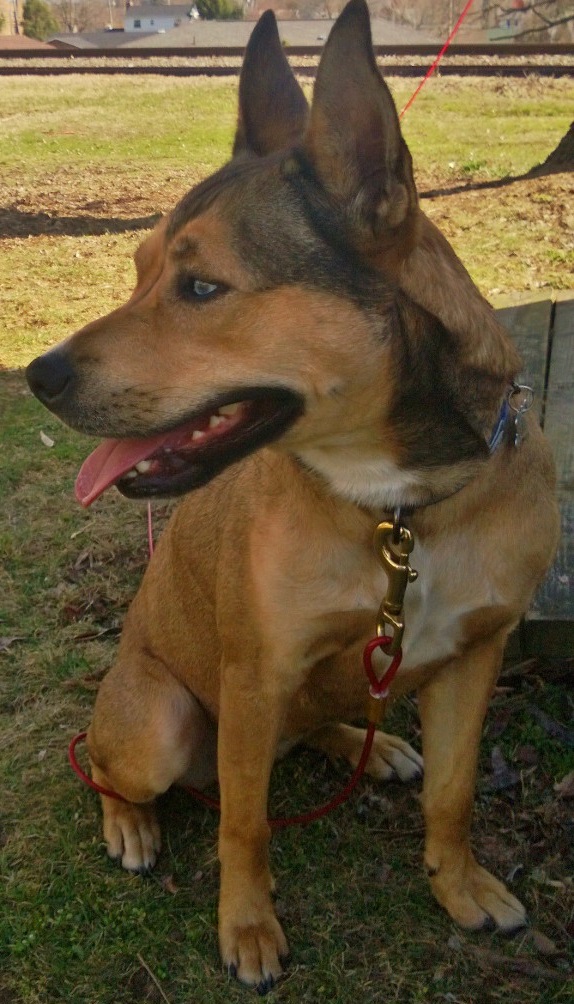 My boyfriend and I bought a house last October, soon after that he started talking about getting a dog to complete our home.

I wasn't as sold on the idea at first. We talked about it on and off for months, then one day in February we were on our way home from the store and I suggested that we stop at the local humane society on the way home. I thought that we would just "go look" at the dogs.

We walked in to look at the dog kennels and the very first dog that I saw was Nova (she was called Bridget at the shelter). I loved her immediately, my boyfriend wasn't as sure because he had his heart set on a beagle.

Nova was nothing like the dog that I thought that I would want. I had an idea of a little lap dog but as we kept looking I just kept coming back to Nova over and over again. I went over to Nova's kennel and she got so excited she was chasing her tail and licking the kennel door.

A worker from the shelter came over and told us Nova's backstory. She had been found as a stray after being shot and was brought in to the humane society where she was treated and taken care of until she was ready to be adopted. She had been adopted once before and then returned to the shelter 4 months later.

You could see in her eyes how badly Nova just wanted to be loved. Seeing how loving and sweet Nova was had convinced my boyfriend that she was the dog for us. As sweet as she was I still wasn't sure that we were ready to bring a dog home and suggested that we leave. We went outside and got in the car, we didn't even get out of the parking lot before we decided that we couldn't imagine not bringing her home.

We went back inside and filled out the adoption application. Unfortunately it was late in the evening and we would have to wait until the next day to get a final decision from the humane society. The next morning I woke up to the phone ringing, it was the shelter calling to tell us that we had been approved to take Nova home. I was so excited, I jumped out of bed and we were at the shelter as fast as we could get there.

When they brought Nova out to us it seemed like she knew she was going home, she couldn't wait to get to us and give us as many kisses as she could.

We have had Nova 6 months now and it was one of the best decisions we have ever made. She makes our lives so complete and I can't imagine not having her. She is the most loving, sweetest, funniest little girl. Having her makes our house feel like a home. I can't wait to come home from work every day and see how excited Nova is to see me, no matter what my day was like before it is always better when I walk through the door and she is waiting for me with her tail wagging.

She is definitely everything that we could have ever wanted and I am so thankful to the great people at the humane society who made the love that we have possible.