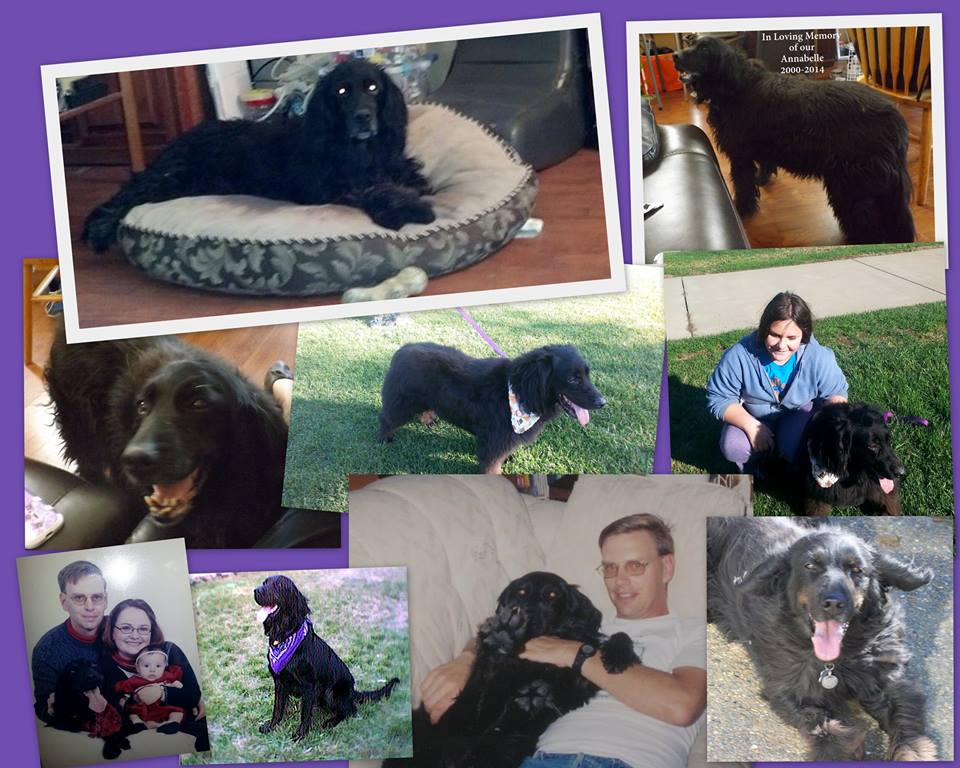 In September of 2001 I visited the local shelter, and found one standout amongst all the pit bulls, rottweilers, and chihuahuas.

I wanted another bird dog, but had no idea what a Gordon Setter was. I watched her con one of the workers out of a second Milk Bone by pushing the first one he gave her under the edge her sleeping platform when he went to grab more. I knew right then that she was the one I wanted.

Sadly two days later, 9/11 happened and everyone's world was turned upside down. I gave up hope of getting her, when she showed up as pet of the week in the local paper a few days later. I hurried back down to the shelter and came home with this big black, always smiling, skinny, ball of energy.

As we left, Martina McBride's Happy Girl was playing on the radio. There was Anna with her tongue hanging out, her goofy grin, and her head on my shoulder from the back seat. It took a while, but we are pretty sure she was a Gordon Setter/Golden Retriever mix that came from a kennel here in Northern CA.

From day one she was very "birdy" and if it moved she would be tracking it. Even if it was a juvenile raven that she trapped in a corner, or a turkey vulture she surprised by jumping over a log!

The next August we welcomed our daughter into our home. I don't remember Anna ever snapping or growling out her. Whether Jessica was pulling that long flowing tail or trying to ride her like a horse. lol She had two flaws. She wanted to eat everything. Canned dog food...still in the can, paper towels, corn dog sticks, plastic bottles, rocks, and the list goes on. And, she had never been socialized with other dogs. We accepted both early on and lived with them.

The one thing we found she wouldn't eat was her Moon Glow Buddy ball. She carried it around like a baby would a pacifier and whined when she couldn't find it. It was always funny to see this glowing yellow ball hovering around the yard framed by two glowing yellow eyes. A year ago the vet said her heart murmur was getting worse. In November I returned from deployment to find her coughing and out of breath all the time.

The Vet confirmed our worst fears, congestive heart failure. We started her on meds that helped some, but in the end was not enough. The last weeks before we lost her, she was by my side anytime I was near her. Just touching me seemed to be enough for her.

It has been two weeks today since we lost her, and there is a huge hole in our hearts and our house.

I know I will never find another one like her. But I also know, when it is time she will send a new dog to our door.