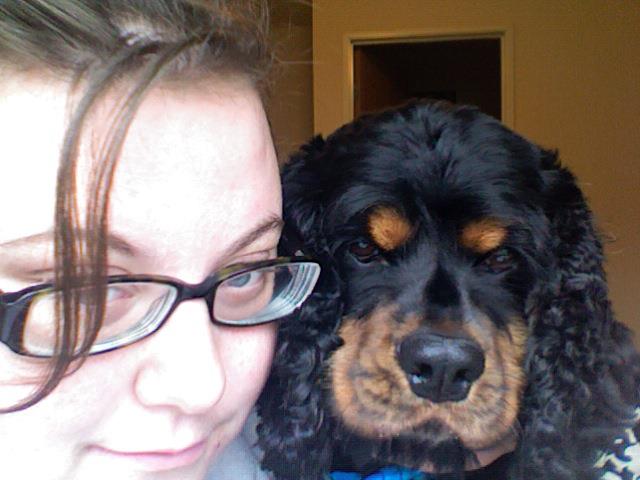 As I sit here tonight, Apollo is next to my recliner, head resting on his paws snoring gently. I adopted him a year ago today.

I was up late in July of 2012 when my local shelter posted their stray ward. I flicked through the album like always when I saw a picture that made my heart stop. A little black and tan dog, behind the bars of a cage. The picture wasn't great; it was a profile picture and most of him was hidden by the large bars. The only info said "Male, neutered. Kennel #281". I texted the picture to my parents and siblings. This dog would be mine, he had to be.

The next day I called the shelter. He wouldn't be available till the 18th of July, he had to wait in case his owners recognized him. A volunteer would later email me and inform me that he was most likely dumped by someone, no one was looking for him. He'd been neglected or on his own for a long time. I went to the shelter and filled out all the paperwork. I originally thought he looked like a Cavalier King Charles Spaniel, but the Animal Control officer told me he was definitely a cocker. I went ahead and made an appointment for him with my veterinarian, and called my groomer and made him an appointment there as well.

I had been looking up names that I thought suited him (even though I hadn't seen him in person yet) and the groomer needed a name. I decided on Apollo. A good strong name. I also read a few books and online articles on cocker spaniels to make sure the breed would still be a good fit with me. I found out that Apollo wasn't likely to make it into the adoption ward. He wasn't doing well in the shelter environment. If I didn't adopt him, he would more than likely be destroyed. If I was approved and I wanted him, I better show up that day to get him. Preferably that morning.

8AM on July 18th, 2012 I was at the shelter with a brand new red leash and matching collar; I thought the color would look great with his black fur. I went to the front desk and told them I was there to adopt #281. There was some panic when my paperwork wasn't found right away; but that was soon sorted out. The lady at the front desk called the kennel over the intercom "Bring out #281... he's going home." Out he came. The door flew open and a girl was dragged behind this mop of black and brown fur that was vibrating with excitement. Our eyes met and he ran towards me, of all the people in the lobby. I fell down to my knees with tears in my eyes. I knew we were meant for each other. He put his paws in my lap, licked my face and promptly started peeing everywhere. They apologized, and I laughed, I wasn't going to change my mind because of a bit of pee.

I found out that because he was in the stray ward they couldn't touch him for 7 days; for those few days he hadn't been eating or drinking much, and this was his first time out of his kennel in a week. No wonder he was excited. He stood patiently while I put on his new collar and leash and we went home.

Our first night worried me. He still wouldn't eat (which I knew was anxiety still) and then a thunder storm rolled in. I had grown up with a dog who had storm anxiety so I waited patiently in case he cared; he didn't seem to be bothered. We went to bed, I made him a bed in his kennel with old pillows, an old t-shirt I wore and put in there for him as well as a few towels and toys. I left it unzipped; I felt he had already spent far too much time in a kennel today. I could hear him panting, which I contributed to anxiety. I tossed and turned and finally got comfortable. Just as I was falling asleep I felt him jump on my bed. He circled and collapsed by my feet. His panting slowly stopped and turned into snoring.

His vet appointment the next day didn't bode well; he had ear infections, his nails were overgrown, he was covered in mats of hair that were causing skin issues (he stunk!) and he had kennel cough. He also was not neutered as the shelter claimed. Not a big deal though, everything was fixable, the most worrying thing was his weight which was far too low for a cocker of his age, approximately 15lbs. Off to the groomer! They shaved off approximately 5lbs of hair, making him even tinier than before. No matter, He was even more adorable to me, and he seemed so much happier to be rid of his excess hair. His little nub was always wagging now, and he stuck by me like a shadow.

He loved his toys, the fluffier the better. He'd cuddle with them at night and bring them to bed. As time passed his health improved and he was neutered. We went to obedience class which he graduated from with flying colors. He also became a therapy dog and comes with me, a Home Health Aid, to visit my elderly clients and sit by their feet or impress them with his tricks.

I couldn't have asked for a better dog. Despite everything he went through it doesn't faze him. His capacity to love transcended what humans had probably done to him, or more importantly what they probably didn't do. Now he loves being groomed, and he tolerates his ears being cleaned. He helps me train his new little sister, Artemis, another rescued Cocker who we adopted at 7mos old from a bad situation. He's been very loving towards her and has been more successful teaching her doggy manners than I have been teaching her to sit! He was a shelter dog. That doesn't mean he was defective, that doesn't mean he isn't healthy, or that he's badly behaved. It means that for some reason he ended up in a bad situation. I saw only his picture, and I knew his potential.

He may be a rescue dog, but to me that just means he's a perfect dog.