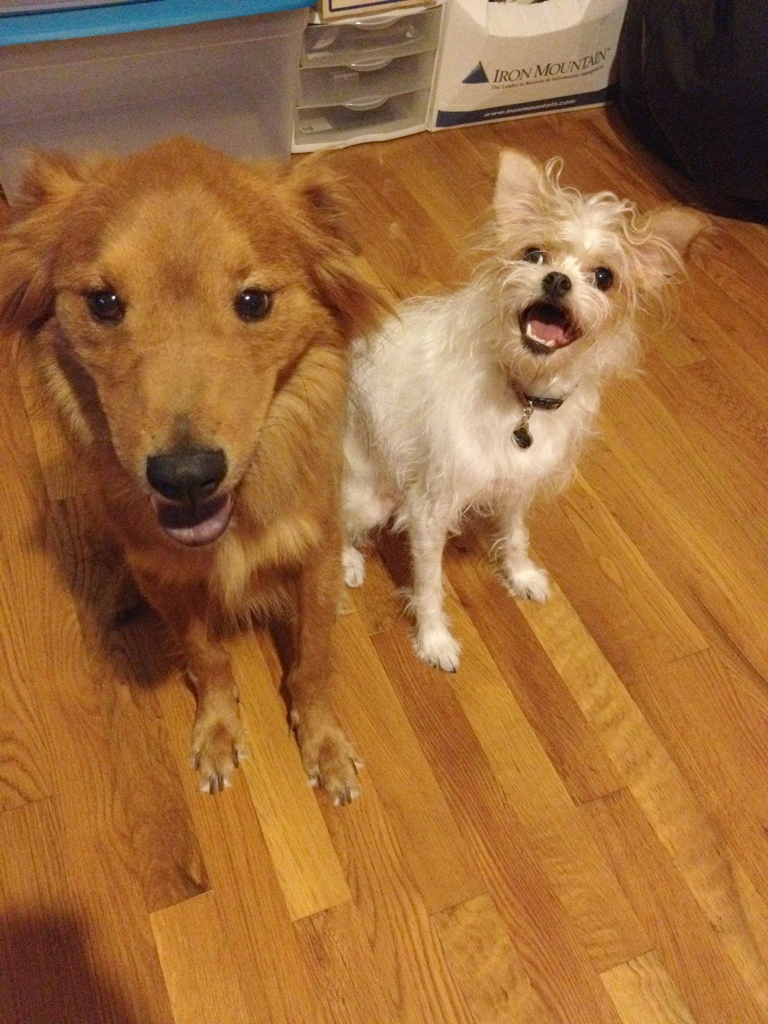 My (now) husband and I dated for 7 years before we got married, and both of us come from incredibly tight-knit families. So, it’s no wonder that after we had established our relationship we were eager to start a family of our own. Well, a furry family, that is. We adopted our first rescue mutt, Kovy in the Spring of 2008. At first he wouldn’t make direct eye contact with us, and we were told that he had been neglected and as a result was somewhat distrustful of humans. But over the next few months, he quickly realized that he was ours and we were his. And we weren’t going anywhere. Our little family moved to Nashville, TN to start a new adventure, and during the summer of 2010, a massive flood hit the city leaving houses destroyed and many animals homeless. At that time we had already spent weeks looking for the perfect adult, male, medium-sized playmate for Kovy. When we showed up to the adoption center to meet the dog we had selected, we were told that he had already been adopted. Great for the pup, but sad for us. Before leaving, though, we took a quick look at the other dogs that were left. I saw a teeny Chihuahua/Wirehair Terrier puppy shivering in a crate and wanted to hold her for a minute, knowing the turmoil she’d been through during and after the flood. When I picked her up, she instantly nuzzled into my neck and fell asleep – probably the first few minutes of peaceful rest she’d had in days – and the adoption coordinator told me that her litter was abandoned when her family’s house was evacuated. I remember repeating to my husband “We’re done. I’m done. We’re done.” As a female puppy who’d weigh . full-grown, she was the complete opposite of everything we thought we wanted. But we now joke that had we known what a hilarious little ball of energy we were getting that day, we’d have camped out outside the adoption center the way people do for the latest Apple gadget. Kovy and Kayce (we lovingly call her “Moo”) are absolute best friends, and despite being a quarter of his size, Kayce tends to be the one keeping Kovy in line. Funny how we started out just thinking about how the dogs would change our lives, but in the end, we ended up changing their lives too. I’d never, ever go to a breeder or pet store to purchase a pet. I think we spent less than $200 combined on their adoption fees, shots and neutering/spaying – on one hand it was worth every penny, and on the other, I’d have paid thousands more. At the end of the day, they’re priceless.