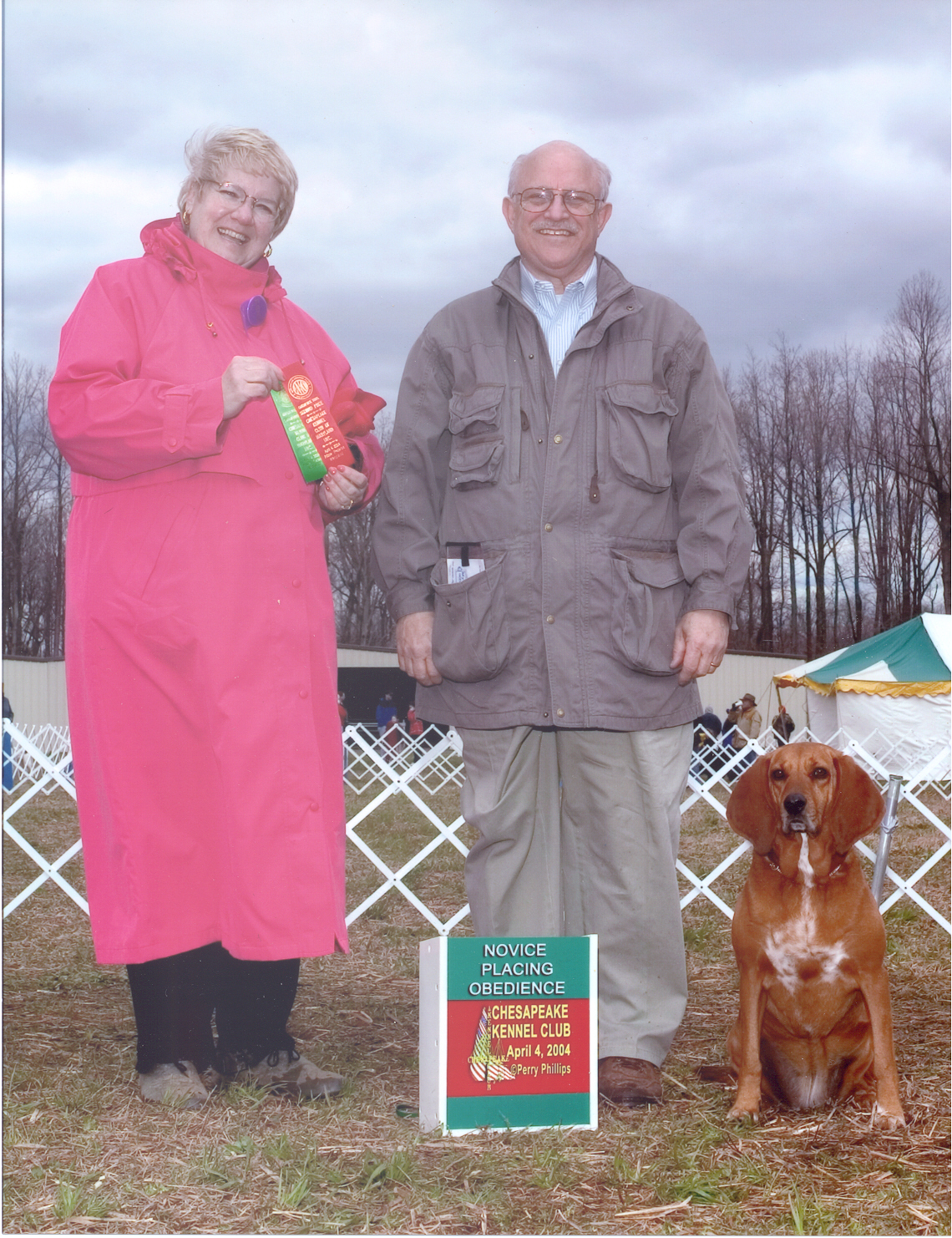 We adopted Belle in the Spring of 1999, at eighteen months old. “Just going out to see what’s available” – after we lost Jenny. She was at Pet Smart in Chantilly. What a beautiful animal and she looked so sad – long ears, big brown eyes, mascara, tail down. We took her out to some grass by the parking lot for about an hour. She let us handle her in ways she never let us do again. I think she knew before we did. When we first got her she wouldn’t get on the furniture or beg – but we fixed that in short order. Belle is the first Redbone ever to get an obedience title from the AKC. Something she and I worked on for a long time through lots of practice and many competitions. As a scent hound she was totally mystified that some dogs will retrieve something just so the owner can throw it away again. I don’t think Belle ever understood why this was important to me but if I wanted it she was willing. She did it her way but completed qualification in April, 2004. I like to think arthritis kept her from more advanced titles but the truth is that she drew the line at going over a hurdle to retrieve something when you could just as easily go around. Belle earned her CD (Companion Dog) title and also passed the Canine Good Citizen’s test. When our house was being built, we lost Belle once for eight nights, had hundreds of people involved in the search, made the newspapers twice, and finally found her under a deck about a mile away. She'd been injured and that's what hounds do - go to ground. She was very glad to see us but had found a couple of little boys to feed and water her without their parent's knowing. Belle brought a whole new meaning to the words "gentle" and “sweet.” She was a favorite of everyone she met - deep red coat, long floppy ears, big brown eyes and mascara that made her look perpetually melancholy. The last couple of years were difficult for Belle. She had two, serious strokes that left her unsteady and she was very arthritic. She had a real routine around dinner- her dinner, Doug’s leavings, Regan’s leavings, dog bone, outside for her nightly patrol. Her patrols had gotten slower and slower and covered less and less territory but she still had the most wonderful, soulful bay when she picked up a good scent. We know that Belle’s passing leaves an ache in all our hearts to think about not having her sweet presence in our lives. But, having been here before, we know that the ache will heal and we will always think of her with a broad smile and a wink. I’ve often heard dog people say – “If there are no dogs in heaven, I want to go where they go.” I have faith in a life after this one and I like to think of it as a place where we are reunited with all the family and wonderful dogs that we’ve ever known. Dogs are wonderful! We love you Belle, and we will miss you. You can see pictures of Miss Belle at https://plus.google.com/photos/108431303953025490726/albums/5535369636902136609?banner=pwa.