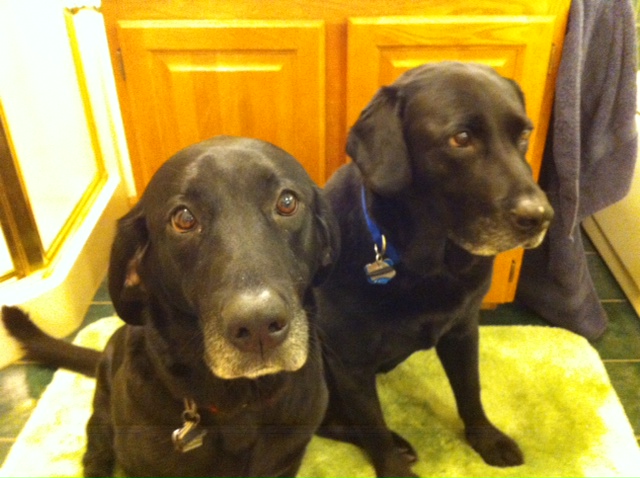 Sampson came into my life shortly after the passing of my previous two dogs, who lived to be 14 and 16, respectively. Because I had just lost two beloved pets in the span of 14 months, I was not at all certain the time was right to open my heart to a new four-legged friend. The one decision I'd made about any future dogs was that I wanted to adopt an adult dog, not a puppy.

With the help of a dear friend who spotted him at the shelter and insisted that I just "come take a look", Sampson quickly won me over and became the newest member of the family.

Sampson is what I call an "old soul" - he looked like he'd seen it all. His beautiful eyes and calm demeanor drew me in as we got to know one another in the play yard at the shelter. He already knew all of the basic commands, and in true lab form, loves to play catch.

After about 6 months with Sampson as a solo dog, I wondered if he would like a buddy. As luck would have it, I was searching the Animal Control website one day and they had a 5 year old black lab up for adoption.

Jett was given up by his elderly owner who could no longer care for him. Sampson and I made a visit to the shelter, where the two dogs were able to have their first play date.

Once again, the decision was an easy one. Jett and Sampson were fast friends, and I was thrilled to have the opportunity to adopt another adult black lab.

These dogs have brought more joy and love into our house than I could have ever hoped for. They are clever, smart, patient, and loyal. We feel fortunate they came into our lives, and we look forward to many more years of playing frisbee, couch cuddles, and doggie kisses.