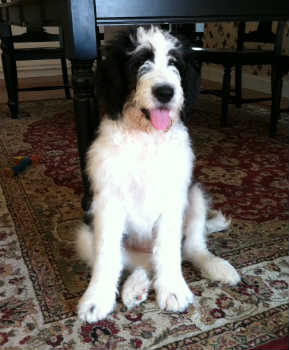 Today I wake up to a big wet kiss from Zeus the pup I adopted that's his way of saying let's go for a walk.

My life started out like any other young adult life (I was 22) I had a great house with a big back yard and a lot of room it was on a dead end street with no cars and hardly any people but my street only had elderly people who really nice but you can not go ask them "hey you wanna go for a walk?" I was lonely and very lazy. My twin sister told me that she has a new litter of Norwegian forest cats she said that I could even have first pick I told her no thanks and so she left me rethinking what I just told her maybe she was right maybe I need to get a pet (not a cat) so I called three different humane society's around my town and they had great dogs but none were a good choice for me.

finally after my last visit to see a dog I gave up and went home were I made microwave pot pie but was not eating it I was upset and was really thinking hard maybe I should get a cat but even the thought made me shiver.

When I was little I got clawed by a cat and it was a really bad scratch it was bleeding for an hour when my mom finally took me to the doctors were they stitched my arm up and sent me home. Then the phone rang it was my friend who was a puppy foster dad he said he has a puppy that he said I might like he said I could see it any time so I told him ok I will see you after lunch at the park at 1:00 and I hung up the phone and went to bed.

The next morning I got up eat breakfast and went to school (college )that was only a short bike ride from my house. After I ate at subway I rode to the park were I saw my friend right away he was walking a puppy that kept tugging on the leash my friend waved and came over with the hyper pup as soon as the pup saw me he barked and ran straight for me my friend tugged at his leash and obediently sat down.

I bent down on one knee and stroked him his fur was very soft and fluffy he also had great big paws. My friend asked me if I want to take him for a walk while he rest for awhile I asked the pup and he answered with a really big WOOF! So we walked around the pond were he tugged at his Leash to go chase the ducks I told him no and he looked at me wagging his tail and smiling.Friend joined us and he asked is this the right dog? I asked him what kind of breed he was my friend answered and said he is a Saint Berdoodle a cross between an poodle and a Saint Bernard.I told him never even heard of one but I new this pup was right for me so asked wanna go home boy? He answered with a great big WOOF! as I laid in bed thinking up names I said teensy come boy but he did not come then I randomly said Zeus here boy and he leaped on my bed today he has his own bed right next to me were he sleeps until a another new day.